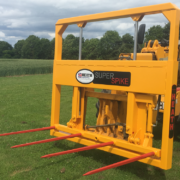 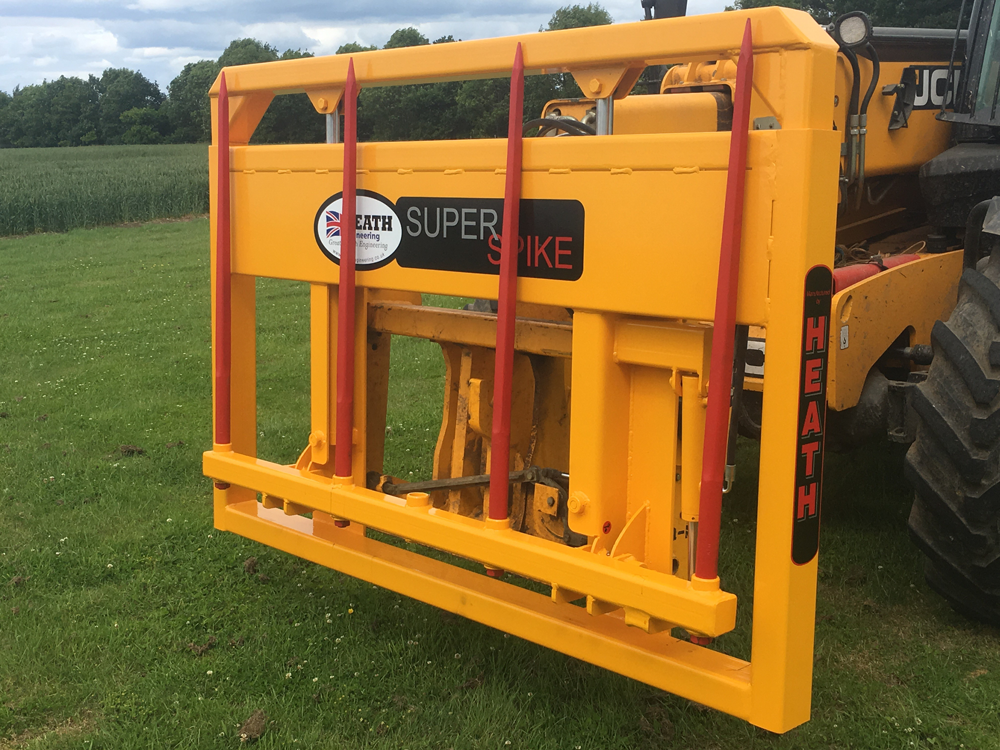 Built with strength and longevity in mind, all three models include features such as the tines being able to fold away for safe road transport position, while the safety bale bar extends for safe bale handing. 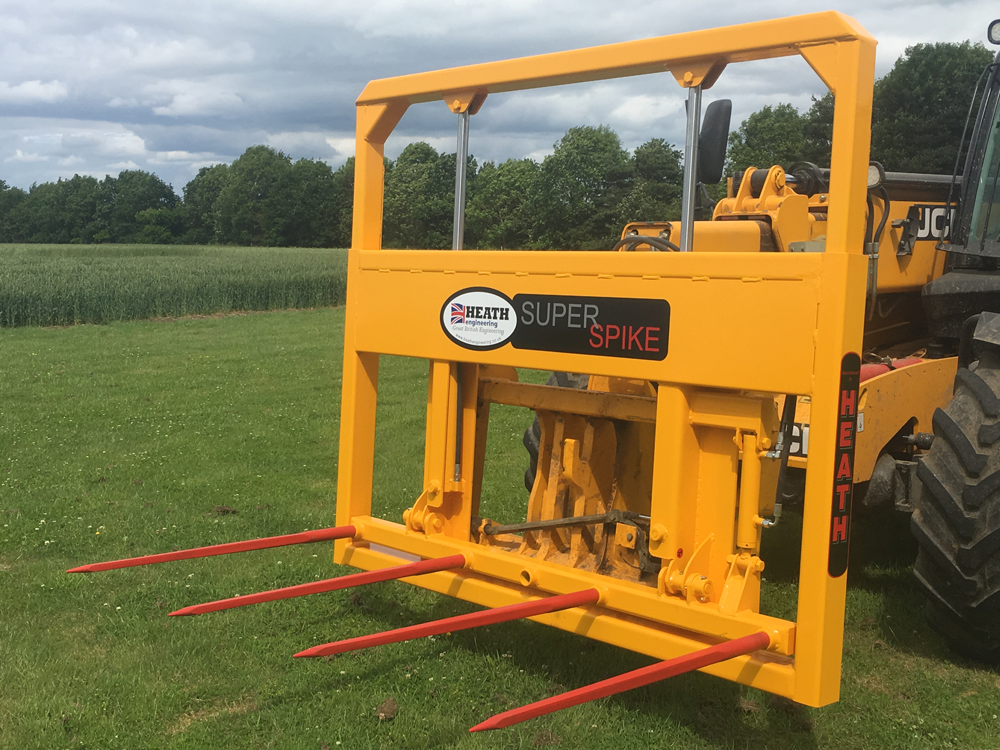 Founded by Harold George Heath in 1944 and now in its third generation of the Heath family, many customers learn that equipment carrying the ‘Heath Engineering’ name is synonymous with machines that are built to do the job and will last. 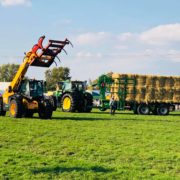 Two Heath Super Chasers were the machines of choice at the recent Great British Straw Challenge, held at the Moreton Show in Gloucestershire in September. 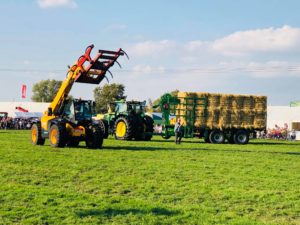 Located in the beautiful north Cotswolds, Moreton is one of the biggest one-day agricultural shows in the UK attracting visitors from all over the country. The 2018 show featured over 350 trade stands, various livestock, a dedicated horse section, a rural attractions area and a grand arena with a number of exciting events taking place.

One of which was the Great British Straw Challenge which saw two teams, RJR Contracting and Thomas Gaydon Logistics, using Heath Super Chasers to compete against each other.

Contestant Robert Redman from RJR Contracting, was on hand to explain the widely attended competition.

“The Straw Challenge has been a long-standing competition and this year, for the first time ever, event organisers decided to introduce Heath Super Chasers into the competition.

“Basically, it was a race in which the teams used the Super Chasers to pick up the bales on the floor. Once all the bales were collected the Chasers would race back to either end of the ring and whoever got there first was the winner.”

The range of Heath Super Chasers have been providing reliable and efficient agricultural solutions for well over a decade. The original Super Chaser was first brought to market in 1995 and quickly made an impression on operators by handling 10 4×4 Hesston bales. This design was enhanced in 2006 when the Super Chaser Extra was brought out with extra capacity, allowing for 12 instead of 10 Hesston (4×4) bales.

Equally as popular is the QM Super Chaser which was released in 2002 and was designed to take every other size of big bale except the Hesstons. It takes 14 midi (4×3), 18 quadrant (4×2), 24 mini (3×3) or 27 3×2 bales and bales are stacked on their strings to ensure stability. Following this, the QM Extra was produced in 2012 with an extra 20% capacity. It also features air suspension, radial tyres, air brakes with ABS and hydraulic extensions to the pushers and side gates.

Although Robert was on the losing team it didn’t stop him from cherishing the challenge as a memorable experience.

“It was so nice to be able to compete in the challenge and it was a lot of fun. I think the Heath family were also really pleased to see their kit being displayed like that and for me – using the machines was the best part of the challenge.

“We regularly use the Heath Super Chasers and they are absolutely fantastic pieces of kit. Prior to using them I used to have a different machine, which was very good but a little slow. Since I’ve been using the Super Chasers I have honestly never looked back – they are incredibly fast and efficient. My two Super Chasers have probably done about 60,000 bales of straw and I’ve had no breakdowns since using them, so they are also very well built and reliable too.” 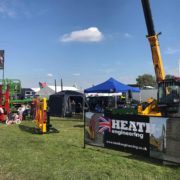 Heath Engineering concluded their busy 2018 event schedule with a successful Moreton Show in Gloucestershire. Visitors took advantage of the fantastic weather with one even purchasing the Heath Bale Grab directly off the stand. 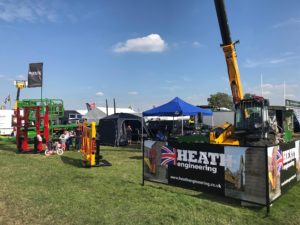 The event was so successful that the company has already confirmed their attendance at the 2019 show.

Other products at the show included the Heath Super Spike and Super Chaser, with a good number of enquiries taken throughout the day.

The show itself has lots of family fun from terrier racing and stunt motorbikes to Tractor Ted and circus skills, as well as celebrating farm to fork with delicious British food.

Managing Director Pete Heath was impressed with Heath Engineering’s first appearance at Moreton and commented: “It was a great show that served two purposes; a chance for us to meet both new and existing customers as well as showing them other products which they may not have been aware of.

“The stand was certainly busy throughout the day with lots of interest, which led us selling one of our machines off the stand.”

Heath Engineering is an innovative British manufacturer who has been producing agricultural equipment for over seventy years, with many customers learning that equipment carrying the ‘Heath Engineering’ name is synonymous with machines that are built to do the job and will last. 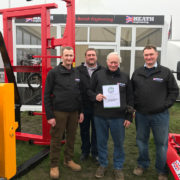 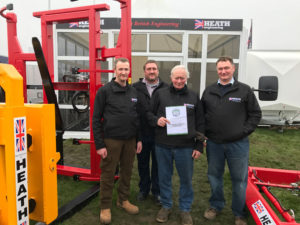 The innovative British manufacturer impressed judges with a range of farm equipment on their stand which received a host of interest over the two days of the show.

LAMMA, now in its 35th year, is the UK’s largest farming and agricultural equipment and service show. With almost 800 exhibitors and more than 40,000 attendees, the innovation awards highlight the progressive nature of machinery and equipment of the agricultural supply industry. The aim of the LAMMA Innovation Awards is to draw attention to new ideas, products, techniques, or service excellence.

Pete Heath, one of the company directors, commented: “Scooping the certificate of merit award was very exciting for us and gave us a reputable vote of confidence in our product and technology.” 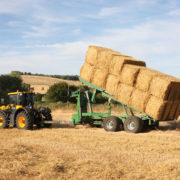 Heath Engineering will be making their first appearance at LAMMA 2017 on stand B80, held at the East of England Showground, Peterborough in January.

The innovative British manufacturer has been producing agricultural equipment for over seventy years with many customers learning that equipment carrying the ‘Heath Engineering’ name is synonymous with machines that are built to do the job and will last.

Headlining the range of innovative equipment is the Heath Super Grab and the Heath Super Spike – both of which are set to attract a lot of interest from visitors who are looking to significantly improve their productivity.

The Heath Super Spike is a bale handling spike specifically designed with road safety transport in mind. Built with strength to allow a 1.5 tonne carrying capacity, the tines fold away for safe road transport position, while the safety bale bar extends for safe bale handing.

The Heath Safety Forks is another safety focused product. The pallet tines have been designed to fold away for road transport making roadwork safer, while all controlled from the cab.

With the Heath Super Dozer you can always fill your grain sheds to capacity. This innovative telescopic grain dozer gives an extra 1500mm of powered push. The telescopic and carriage mounting points ensure a fold up vertical position for safe road transport between grain stores and farms.

The Heath Super Bucket is a high capacity 3 tonne grain handling bucket for farmers that require the fast loading of lorries – saving both labour resource and money.

The Heath Handling Jib has been specifically designed for use with non-telescopic materials handlers to allow extended handling of one tonne bags safely.

No more smashed mirrors from accidental reversing into shed walls! The Heath Folding Mirror Kit is a unique hydraulic fold-up mirror for use on telehandlers with pick-up hitches. It is linked into the pick-up hitch hydraulics of the vehicle to enable operation from within the cab.